March 15, 2018
In January, I had the amazing opportunity to travel to Orlando, Florida for FETC 2018 (Future of Education Technology Conference). Believe it or not, it was the first time I had ever attended! What I loved most about it was the number of tracks offered: Administrator, Information Technology, Educator, Special Education, and Early Learning. There truly was something there for everyone, and so many sessions that it literally took hours to choose a single day's worth of sessions. Though my intended focus was Computer Science, I found myself drawn in by some of the other offerings.

Below are some of the amazing things I learned about the world of AR, VR, MR, and AI. I can't wait to find some time to dig in and learn more about some of these resources, products, and websites!


Augmented Reality (AR): a technology that superimposes a computer-generated image on a user's view of the real world, thus providing a composite view. If you want a quick idea of what this can do, download the Wayfair app and place a piece of furniture in your home using their AR interface.

JigSpace - Explore and learn about objects in 3D. iOS only at this time.

AirMeasure - An AR measuring toolkit. Use the AR technology to measure real-world objects.

WorldBrush & Wallame - Create your own AR experiences in the real world.

StoryFab - Use AR and your own environment to make movies with virtual characters and objects. Their website has little information; their kickstarter campaign has more.

Google Expeditions AR - Maps the physical classroom and places AR objects for kids to explore and learn about. Just this week I had an opportunity to see Google's AR in action through beta testing program Google is currently offering. Although the teachers were not able to make strong curricular ties yet (content is limited at this time), the potential is huge. The kids were highly engaged and very enthusiastic. Teachers observed that students who rarely spoke in class or have learning disabilities were fully focused and actually interacting with their peers around the content!

If you want to see it for yourself, sign up to test out Google Expeditions AR!

Virtual Reality (VR): the computer-generated simulation of a three-dimensional image or environment that can be interacted with in a seemingly real or physical way by a person using special electronic equipment, such as a helmet with a screen inside or gloves fitted with sensors. Check out the preview for the movie Ready Player One for a glimpse of the direction this technology may take.

Mixed Reality (MR): the merging of real and virtual worlds to produce new environments and visualizations where physical and digital objects co-exist and interact in real time. A bit like AR & VR combined.

Seeing AI: Narrates the world. Originally designed for the visually impaired, this app can describe objects placed in front of it, read text out loud, and more.

AmperMusic: From their website: an artificial intelligence composer, performer, and producer that empowers you to instantly create and customize original music for your content.

If you have implemented any AR, VR, MR or AI in your classroom, please let me know what you think! I'd love to hear which apps/activities impressed you the most.

Popular posts from this blog 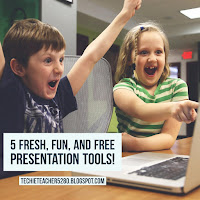 As you know, this summer (2016) ISTE will be releasing the newly revised standards for students . In the second draft of the standards, standard 1d calls for students to " experiment with emerging technologies, drawing on their knowledge of existing tools and operations, and demonstrate an agility in troubleshooting and solving technical problems." Although not yet finalized, it's a pretty safe bet that the final version of the standards will include some variant of this requirement. Although there are many ways to integrate technology, often presentation tools are used as a vehicle for formal or summative assessments and can be the easiest way for teachers to allow students to choose their own tool without direct instruction on how to use it. If you're looking for some new presentation tools for students to implement in lieu of Google Slides, Prezi, PowerPoint, etc., check out this list of five fresh, fun, and FREE presentation tools!
Read more

January 09, 2010
One of my biggest challenges this year has involved email. My school district does not currently give students access to email. They can't access webmail sites like Yahoo, Google, etc., and the district does not provide district email for the students. This has proven problematic for a couple of reasons. The biggest one is that 4 of my teaching standards involve students using email. Alas, I have not found a way around this. It'll be tough to teach kids how to email without email! A byproduct of not having email access has also been that it's difficult for me to use Web 2.0 sites with my students, as many of them require that new accounts be created with existing email addresses. Luckily, I found a solution to this second problem.
Read more

July 10, 2018
If you've never been to the CSTA 2018 ( Computer Science Teachers Association ) conference before, you need to go to Phoenix, Arizona for their 20th anniversary conference next summer. This year's conference was held in Omaha, Nebraska, and was a huge success. With a record number of attendees (700), fabulous workshops, sessions, a vendor hall, and a field trip to the University of Nebraska, there were tons of opportunities to learn about CS, not only from presenters but from fellow attendees as well. The sessions were informative, the food was great, drinks were free (a couple), and the atmosphere of camaraderie made learners at all levels feel welcome and accepted.  My head is still swimming with all the great things I learned, but below is a summary of my three favorite sessions.
Read more